How To Change Android Themes 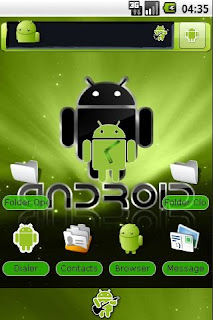 One of the frequently asked questions about Android devices is how do you change theme, or use one of the themes available in the Android Market. This guide will explain what are the different types of themes, and how to use each type.
Type of themes are:

Other sorts of customization will also be covered.

App themes are built into individual apps. They should be more accurately described as “color schemes”. Usually, there are only two variations: white on black (i.e. dark theme), or black n white (i.e. bright theme). For example, Appbrain has both a white or black theme built into the app. It can be changed from within the app’s preferences.
However, some apps go a lot further. Some SMS apps like Handcent SMS or Go SMS allow you to configure how the SMS “conversations” will appear. Type of icons, placement of the “bubbles” or dialog boxes, list or conversation style, and so on are possibilities. However, these may just be part of preferences, not as an overall “theme”.
App themes in general controls the “borders” of the dialog boxes, the colors of the buttons and the input fields, any icons and bitmaps (including backgrounds) used in the app, and notification icons (if any). They are restricted to within the app itself.
It is not possible to add themes to existing apps unless there is some sort of capability built into the app. For example, Go Contacts and Go SMS have themes for their specific apps. Other apps may have this capability as well, but it must be built into the app.  Handcent SMS also has themes, but they chose to call it “skins”.
If the app offers no ability to theme, it may be possible to find “hacked versions” of the app that has different looks, if it is a popular app. For example, HTC_IME, a popular Android soft keyboard, has several “mod” versions to fit with different color schemes. However, these are hacked copies of the original app, so you cannot load two of these at the same time. You have to uninstall the original to put in the “hacked” copy, and due to the dubious nature of these hacked copies, they are not widely distributed. You can often find them on XDA-Developers.

Launcher Pro Plus, which is the paid version of Launcher Pro, has special widgets, and the latest version includes a theme engine that allow those widgets to be themed. Some LPP themes have hit the market. Try them, as their quality varies.

In the Android Market you can also find Icon Packs, which is a compilation of various “icons”. To use them, you will need a compatible home replacement app (see left), or Desktop Visualizer. .
The dock graphics, on the other hand, is just a bitmap. You can see some good ones at https://bit.ly/lpicons

Android’s default “desktop” is called either Home or Launcher. The default one is pretty plain, and there are many different home replacements available. (over 50 at last count) Furthermore, many of the home replacements allow you to load “themes packs”.
The prominent home replacements that accept themes are
The theme packs you find on Android market usually belong to one of these home replacement apps (unless they are “CM7 themes” which will be discussed later). The theme packs are generally not cross-compatible, and are only for that specific app.
These themes in general replaces the app icons both as shortcuts and within the app drawer. Some launchers also allow replacing the “drawer” trigger button, add a background behind the app icons, and so on. There may also be an included background / wallpaper. Actual change of the app drawer function, such as changing the grid density, change the scroll from up/down to left/right, and so on would be based on the launcher itself, not the theme pack.
How to load the theme depends on the app itself. In general, you install the theme like an app, then you should be able to go into the app’s preferences and find the appropriate section to apply the theme. The only except is LauncherPro Plus, where each widget can have its own theme, so you have to apply the theme for individual widgets.

ROM themes (old) requires manually patching the “resources” file within the system area, which means the phone must be “rooted”. There are two ways generally to do this:
You can find instructions on how to use each just below.
ROM themes, being a part of the system, affect ALL parts of the system, including notification bar color schemes, system notification icons (the ones to upper right, like battery, 3G, etc.). They can be overridden by Home-level or App-level themes though.
WARNING: If you patch the files the wrong way (wrong version, wrong phone, wrong ROM, etc.), you will corrupt the files, which would require a reflash or recovery to regain phone function. ALWAYS make a backup first and know how to restore it! How to do so is beyond the scope of this hub, but search for ROM Manager and Nandroid should get you started.

Cyanogen Mod 7 (based on Gingerbread) has incorporated the T-Mobile Theme Engine, which was offered by T-Mobile on Github to the Android Open Source Project. (read more about it here). The power of the Theme Engine allows you to choose themes on the fly without root or patching the ROM at all. However, it must be incorporated into the ROM, and so far only CM7 has that support built-in (presumably other ROMs may follow).
The T-mobile theme engine themes (more commonly known as CM7 themes) are universally compatible with any phone that has the theme engine. Previously the theme must be matched with the specific ROM and revision. Now, the only problem you may have is the theme may only support device of a certain resolution or size.
if you have CM7 loaded, (which would require you to root and flash the mod ROM) you can download and use the themes. How to root and load a mod ROM is beyond the scope of this hub.
These ROM themes, similar to the older ROM themes, can change EVERYTHING, including system notification icons (such as 3G, battery, and more), that previously require individual patch jobs.
One quirk: You may need to reboot the phone for the theme to take full effect, as the launcher itself often caches the bitmaps and whatnot. The notification bar also needs to be refreshed.
Article Categories:
Tips